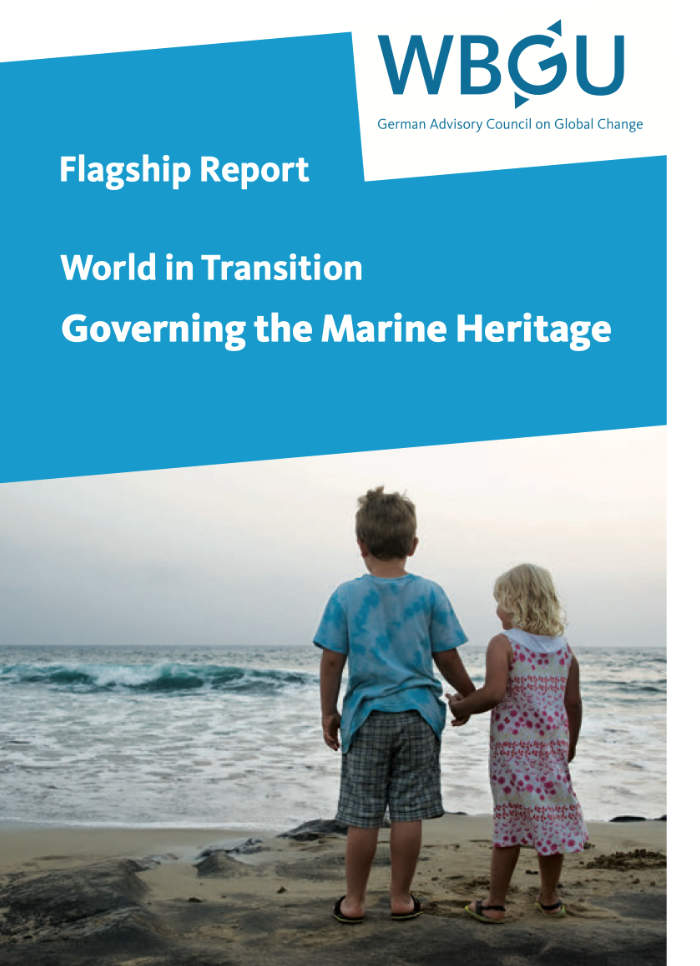 The oceans are part of the common heritage of mankind and should, in the long term, be granted this status under international law. This would give them better protection and ensure that they are managed in a sustainable way.

In view of the oceans’ poor condition the WBGU developed a long-term vision of the conservation and sustainable use of the blue continent: All marine zones with the exception of territorial waters should be declared the common heritage of mankind.

Press Release
Oceans are the heritage of mankind
Share this section

In order to move closer to this ultimate goal for ocean governance, the WBGU also makes recommendations for action that link up with ongoing political processes. In this context it examines the example of two focal themes: food (sustainable fisheries and aquaculture) and energy from the sea. The report shows that sustainable stewardship of the oceans is urgently necessary, that the seas can be incorporated into a transformation towards a low-carbon, sustainable society, and that such a transformation can achieve substantial benefits worldwide both for a sustainable energy supply and for food security.

The Oceans in the Anthropocene

For the vast majority of human history people have believed the oceans to be endless and inexhaustible. As late as the 17th century it was assumed that the seas could never be emptied of fish and that shipping exerted no significant influence on the oceans. Yet humankind actually began decimating marine life – initially on a localized scale – thousands of years ago. The extent of the damage caused by humans then reached a new dimension with the advent of industrialization.

Humans have been using the oceans since very early on in their history. Analyses show that human influence can be proved in all parts of the world’s seas and oceans in the meantime. Today, 40 % of people live no more than 100 km from a coast, and more than 90 % of global long-distance merchandise trade travels by sea.

The direct and indirect use of the oceans has already led to profound changes that greatly impact on the ocean ecosystem and the ecosystem services used by humanity. Moreover, trends show in many cases that the threat to the oceans caused by human activity is still growing.

In addition to present-day uses, new, future technologies and ocean uses are emerging which on the one hand may pose additional challenges for the protection of the oceans, but on the other offer opportunities for their sustainable use.

Despite many international agreements and voluntary commitments, the oceans are not only rising, warming and acidifying they are also being heavily overfished and polluted, and increasingly tapped and exploited as the Earth’s last great source of raw materials. Since 1994, when the UN Convention on the Law of the Sea (UNCLOS) came into force, only one subarea has been recognised as part of mankind‘s common heritage: the area of the seabed beyond national jurisdiction and its mineral resources. In view of the oceans’ poor condition and the foreseeable increase in their overexploitation and pollution, the WBGU is now repeating the call already made by the UN General Assembly in the late 1960s: all marine zones, with the exception of the territorial seas, should be declared as common heritage of mankind. Furthermore, the conservation and sustainable use of the oceans should be a lead project of the „great transformation“ towards a low-carbon, sustainable society.

The WBGU’s long-term vision for the oceans calls for the UNCLOS to be reformed in a way that ensures a precautionary and sustainable management of the oceans. The focus would thus be, both, on the permanent protection of the oceans and on their common use – in a world that will soon be populated by 9 billion people. The whole of humanity should benefit from the potential uses of the oceans. This would require a consensus on how to manage the oceans, a consensus that can be reached via a broadly based social dialogue: a social contract for the seas. The WBGU recommends setting up a World Oceans Organisation and corresponding regional institutions for sustainable marine management as the keystone of a prudent and gradual transformation of international ocean policy.

The world already has a comprehensive international treaty – the UN Convention on the Law of the Sea (UNCLOS) – which acts as a „constitution of the oceans“. However, the regulations agreed therein are often not consistently implemented. Too little is done to prevent or sanction wrongdoing. Classifying all marine regions, with the exception of the territorial seas, as the common heritage of mankind would lead to a significant increase in obligations to take precautions and to protect the oceans. In the exclusive economic zone – i. e. the zone between 12 and a maximum of 200 nautical miles from the coast, whose use is reserved for the coastal states – the obligations to protect, report and monitor should be incumbent on the respective countries. On the high seas these obligations should be assumed by Regional Marine Management Organisations (RMMO), which are yet to be established. Only if these organisations or the states fail in their responsibilities should the World Oceans Organisation have the authority to intervene.

Food and Energy from the Sea

There are good examples of sustainable fisheries in several countries (e.g. Australia, New Zealand), where the negative trend has already been reversed and stocks are slowly recovering. The goal must be to apply these models on a broad front. In the EU, too, progress is visible, albeit slow. Reform is needed especially where political authorities fail to implement scientific recommendations on catch limits, and where the rules are not monitored and enforced. In particular, illegal fishing must be combated more effectively, e. g. by funding monitoring and control capacities in developing countries.
The use of renewable energy from the sea should be promoted by a targeted policy on innovation that takes sustainability requirements into account. This would make it possible to abandon offshore oil and gas production and the climate-damaging mining of methane hydrate.

Today, the global fishery industry is in a critical state. Despite the increased effort being put into fishing and the fact that hitherto unexploited regions (such as the deep sea) are now also being fished, yields have been stagnating for years. Today, nearly 90 % of global stocks are classed as either overfished or completely exhausted. Growing worldwide demand for fish and seafoods can no longer be satisfied by fisheries alone; it is therefore increasingly being serviced by aquaculture, mostly in inland waterways, but also in coastal regions and in the sea.

There is great potential for energy generation from and on the sea.

In the extraction of oil and gas there is already a clear trend towards offshore exploration. This development seems to be continuing in the field of renewable energy; the use of offshore wind energy, for example, is growing much faster than onshore use in European countries. The oceans themselves are becoming increasingly interesting for energy storage, too. Marine pumped storage power plants open up new possibilities for a cost-effective and environment-friendly short-term storage of electrical energy. Further possible uses of the seas include the production of hydrogen or methane from wind power or from aquaculture-based biomass for the long-term storage of energy and the provision of chemical raw materials.

Oceans are the heritage of mankind

Vision on the preservation of the Blue Continent

New Report: Oceans are the heritage of mankind.

The oceans are part of the common heritage of mankind and should, in the long term, be granted this status under international law. This would give them better protection and ensure that they are managed in a sustainable way, concludes the WBGU in its latest report „World in Transition – Governing the Marine Heritage“, which was presented to the Federal Government today.

Voices to this Report

The `World in Transition – Governing the Marine Heritage´ report presents a thought provoking look at crucial aspects of oceans governance. It resonates strongly with our thinking in the World Bank and among the partners of the Global Partnership for Oceans. Nation states, civil society and industry need to work together to support more sustainable and productive ocean use. This report makes a valuable contribution to global thinking on how best we might secure a sustainable future from healthy oceans.

External expert studies are comissoned by WBGU, the responsibility for the content rests with the author.