The German Advisory Council on Global Change (WBGU) will today, at the start of the G8 Summit in Heiligendamm, submit its report "Climate Change as a Security Risk" to Federal Environment Minister, Sigmar Gabriel, Federal Minister for Economic Cooperation and Development, Heidemarie Wieczorek-Zeul, to the State Secretary at the Federal Ministry of Education and Research, Michael Thielen, and to the Minister of State at the Federal Foreign Office, Gernot Erler.

The core message of WBGU's report is that without resolute counteraction, climate change will overstretch many societies' adaptive capacities. In some regions of the world, this may result in internal destabilization processes and state failure with diffuse conflict structures, inter-state conflicts and an overstretching of the international system. Classic security policy cannot respond adequately to these new threats to international stability. Climate policy and strategies for adaptation to climate change are thus emerging as key elements of preventive security policy.

However, this challenge could also unite the international community, provided that it recognizes climate change as a threat to humankind and sets the course for the avoidance of dangerous climate change in the coming years. If it fails to do so, climate change will draw ever-deeper lines of division and conflict in international relations. This problem must also be addressed at the G8 Summit, which opens today.

1.1 billion people are already without access to adequate quantities of safe freshwater resources. The situation could worsen in some regions of the world as climate change is likely to alter the variability of precipitation and the quantity of available water. Furthermore, food security could also worsen in some regions as climate change increases the risk of harvest failure, especially in developing countries. Already, more than 850 million people worldwide are undernourished. Climate change is also likely to result in further sea-level rise and more intensive storms and heavy precipitation. This will greatly increase the risks of natural disasters occurring in many cities and industrial regions in coastal zones. These impacts could overburden weak states in particular and, in extreme cases, encourage their collapse. They may also trigger conflicts over the distribution of resources, especially water and land, and cause migratory movements.

WBGU analysed selected regional hotspots in more detail. Examples are Southern Africa and the Ganges Delta which were found to be especially at risk. Climate change could further weaken the economic potentials of these regions, worsen the conditions for human security and overstretch the capacities of states. Compared with the rest of the world, Africa is already most at risk from destabilization and violent conflict. Millions of people there are refugees from civil war and poverty, and climate change is likely to exacerbate simmering conflicts. A further example is Amazonia, where the collapse of the rainforest would have incalculable economic and social consequences. Besides the developing countries, however, major ascendant economic regions such as the east coast of China are also at risk: here, storm and flood disasters could in future threaten densely populated cities and industrial regions – with severe economic and social impacts.

The developments described could extend beyond the directly affected countries and regions and have global impacts. Unabated climate change would thus become one of the major sources of political conflict in the 21st century. WBGU identifies the following key threats to international stability and security in this context:

In WBGU's view, resolute climate policy action is needed within the next 10–15 years, in order to avert the socioeconomic disruption and negative implications for international security that will otherwise intensify in the medium term. To this end, WBGU recommends that the German Federal Government implement the following measures:

Ambitiously pursuing international climate policy
In order to avoid dangerous anthropogenic disruption to the climate system, a 50% reduction in global greenhouse gas emissions (against the 1990 baseline) is required by 2050. For the commitment period after 2012, the industrialized countries should commit to a 30% reduction in greenhouse gas emissions by 2020. Germany and the EU should enter into strategic "decarbonization partnerships" with newly industrializing countries. Climate protection should be established as a cross-cutting theme in development cooperation.

Initiating a process modelled on the CSCE
In order to master the security challenges posed by climate change, an effective multilateral system is needed. In this context, it is essential to promote the acceptance and the constructive participation of the ascendant new world powers China and India. Germany should undertake the necessary advocacy work within the EU and work pro-actively at international level for the adoption of confidence-building measures. One option is to initiate a process modelled on the Conference on Security and Co-operation in Europe (CSCE).

Reforming the United Nations
The Security Council having debated in-depth the security policy implications of climate change for the first time in April 2007, the Security Council's mandate must be appropriately adapted to meet these challenges. Furthermore, the United Nations Environment Programme (UNEP) should be strengthened and upgraded by granting it the status of a UN specialized agency. Finally, the German Government should lobby for an increase in the funding available to the mechanisms to finance international crisis prevention and peacebuilding regimes at UN level, which at present are inadequately resourced, in WBGU's view.

Stabilizing fragile and weak states
Climate change is likely to contribute to the further destabilization of fragile states. This should be taken into account to a greater extent in the German Action Plan "Civilian Crisis Prevention, Conflict Resolution and Post-Conflict Peace-Building". In this context, the crisis prevention dimension of the European Security Strategy should also be enhanced with the aim of avoiding military intervention as far as possible. WBGU also recommends the clear restructuring of military budgets in favour of preventive measures in the field of development cooperation.

Recognizing development policy as preventive security policy
Climate change will hit developing countries especially hard, but most developing countries lack the capacities to implement effective adaptation measures. Action needs to be taken today. This has yet to be fully recognized in many development institutions. WBGU identifies a particular need for action in relation to water, food security, disaster prevention, and migration policy. In order to master these challenges, the timetable for boosting development assistance adopted by the European Union in 2005 – namely to increase ODA to 0.56% of donor countries' gross national income by 2010 and to 0.7% by 2015 – must be rigorously adhered to.

Expanding global information and early warning systems
In the era of climate change, timely warning in advance of extreme events is becoming increasingly important. The German Government should therefore continue to participate in the development of a global early warning system. There is also a need to provide processed data on predicted regional climate impacts, especially for developing countries.

06 June 2007, Handing over the flagship report "World in Transition: Climate Change as a Security Risk" 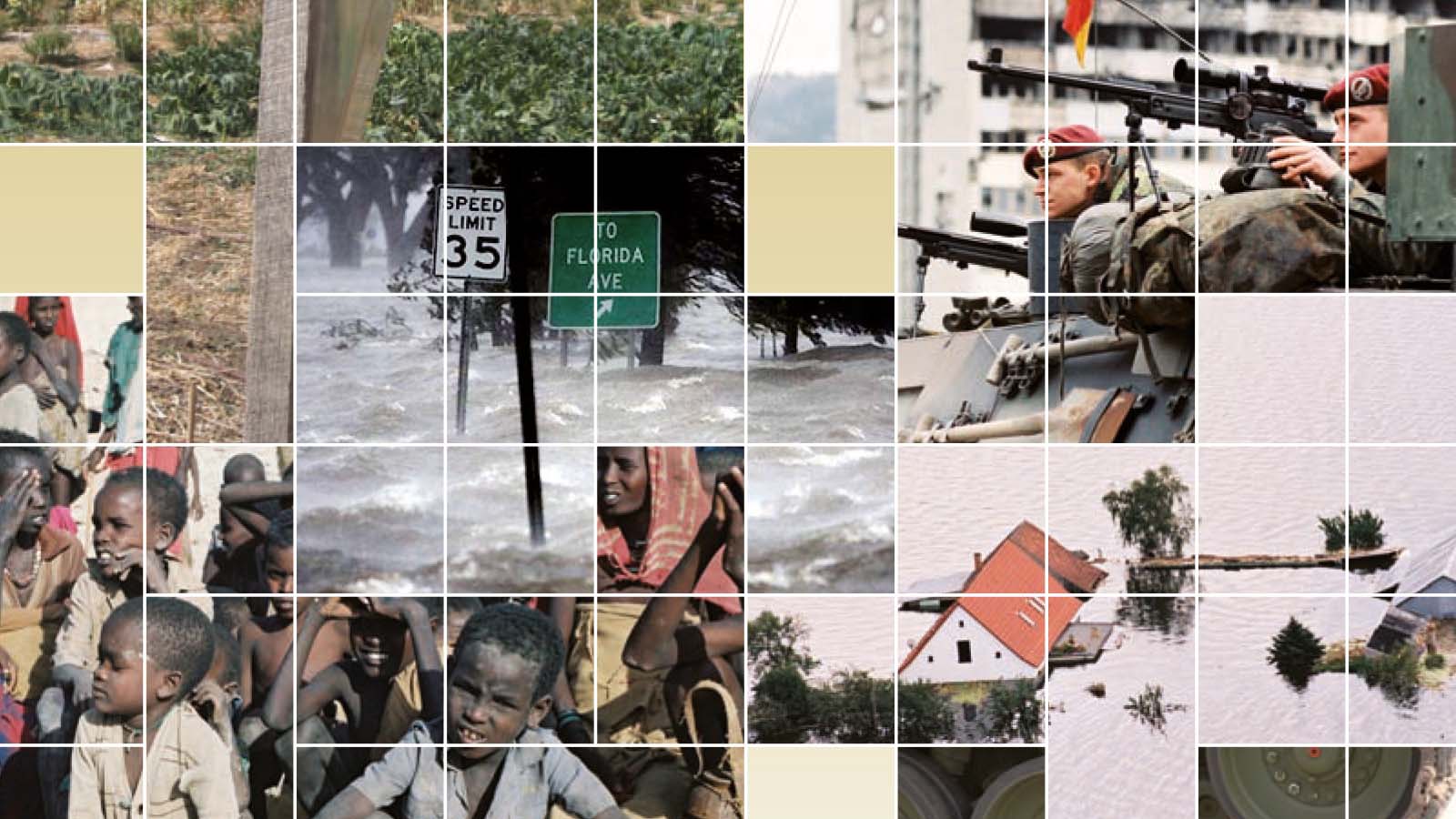 Without resolute counteraction, climate change will overstretch many societies’ adaptive capacities within the coming decades. This could result in destabilization and violence, jeopardizing national and international security to a new degree.