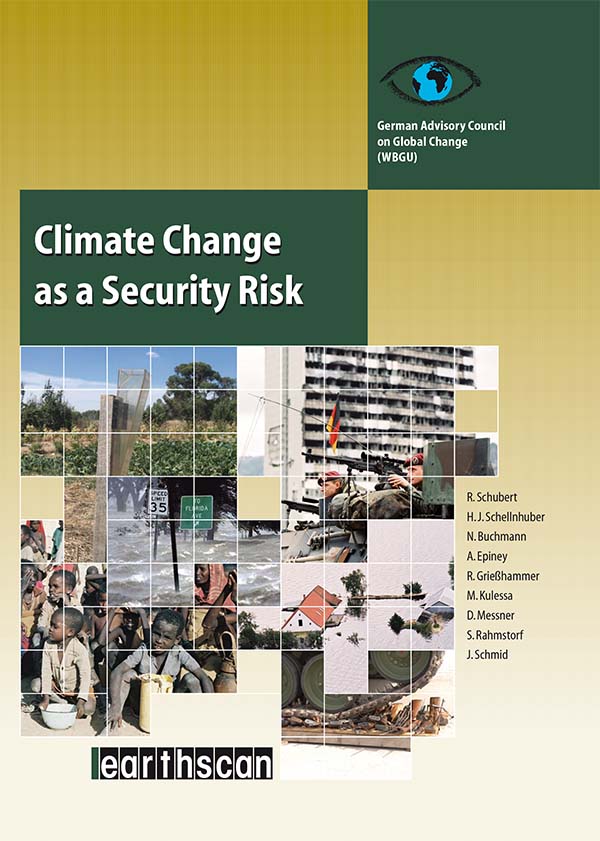 Without resolute counteraction, climate change will overstretch many societies’ adaptive capacities within the coming decades. This could result in destabilization and violence, jeopardizing national and international security to a new degree.

However, climate change could also unite the international community, provided that it recognizes climate change as a threat to humankind and soon sets the course for the avoid-ance of dangerous anthropogenic climate change by adopting a dynamic and globally coordinated climate policy. If it fails to do so, climate change will draw ever-deeper lines of division and conflict in international relations, triggering numerous conflicts between and within countries over the distribution of resources, especially water and land, over the management of migration, or over compensation payments between the countries mainly responsible for climate change and those countries most affected by its destructive effects.

"With Climate Change as a Security Risk, WBGU has compiled a flagship report on an issue that quite rightly is rising rapidly up the international political agenda. The authors pull no punches on the likelihood of increasing tensions and conflicts in a climatically constrained world and spotlight places where possible conflicts may flare up in the 21st century unless climate change is checked. The report makes it clear that climate policy is preventative security policy."

The German Advisory Council on Global Change (WBGU) will today, at the start of the G8 Summit in Heiligendamm, submit its report "Climate Change as a Security Risk" to Federal Environment Minister, Sigmar Gabriel, Federal Minister for Economic Cooperation and Development, Heidemarie Wieczorek-Zeul, to the State Secretary at the Federal Ministry of Education and Research, Michael Thielen, and to the Minister of State at the Federal Foreign Office, Gernot Erler.

Achim Steiner, UN Under-Secretary General and Executive Director UN Environment Programme (UNEP) and John Schellnhuber, member of the German Advisory Council on Global Change (WBGU) are presenting today on the occation of the awarding of the Nobel Peace Prize to the IPPC and Al Gore the English version of the WBGU report Climate Change as a Security Risk.