The Millennium+5 Summit, which will take place in New York this September, will review progress towards the achievement of the Millennium Development Goals (MDGs) and take stock of the United Nations' capacity to act.

The Summit offers the opportunity to set a new course in international poverty reduction and initiate a reform of the United Nations. The German Advisory Council on Global Change (WBGU) considers that the current poverty debate ignores the environmental problems which exacerbate poverty in many developing countries. Today, the Council submits a policy paper to federal ministers Edelgard Bulmahn (Research) and Jürgen Trittin (Environment) in which experts propose ways of overcoming these deficits. Berlin, 9 June 2005. Fighting poverty and protecting the environment are two of the most urgent challenges facing the international community. People suffering from absolute poverty are especially vulnerable to environmental changes. A drought or storm is often enough to destroy the livelihoods of families depending on agriculture, and these extreme weather conditions are likely to occur more frequently in future as a result of climate change. Other factors affecting the poor are environmental risks to health, such as polluted drinking water and the greater prevalence of certain infectious diseases as a result of climate change.

With their dynamic economies, major developing countries such as China, Brazil and India are key to global environmental protection and poverty reduction. Many of these ‘anchor countries’ are taking on an increasingly pro-active role in the international arena. They will thus be vital partners in international cooperation in future. Anchor countries could, and should, assume an increasing share of the costs of poverty reduction and environmental protection. However, incentives and offers of cooperation from the industrialized countries – e.g. in the sphere of climate protection – are still important. Responsible environmental and development policy action should be supported through strategic partnerships with the anchor countries.

WBGU considers that the only way to overcome the lack of coherence and improve the enforceability of sustainability goals is to establish a new lead agency in the UN system. The Economic and Social Council (ECOSOC) cannot fulfil this role. WBGU therefore recommends that it be replaced by a Council on Global Development and Environment, which should be established on the same hierarchical level as the Security Council. The new Council would provide the strategic and policy framework, coordinate the activities of the multilateral organizations working on development and environment – including the International Monetary Fund and the World Bank – and focus their work towards the guiding vision of sustainable development. Furthermore, UNEP should be upgraded into a UN specialized agency.

WBGU estimates that the sum of US$200-300 thousand million annually is required to achieve significant progress in global poverty reduction and environmental policy. This would entail a threefold increase in official development assistance (ODA), to be introduced incrementally. New environmental funding mechanisms should also be utilized. For example, WBGU is in favour of introducing charges for the use of global common resources. The costs of inaction would be far higher than this funding requirement, so the benefits of taking action are considerable. For example, the damage caused by failing to protect the climate is likely to cost at least ten times more than emissions avoidance, and investing in healthcare in the developing countries could produce an economic yield six times higher than the initial investment. 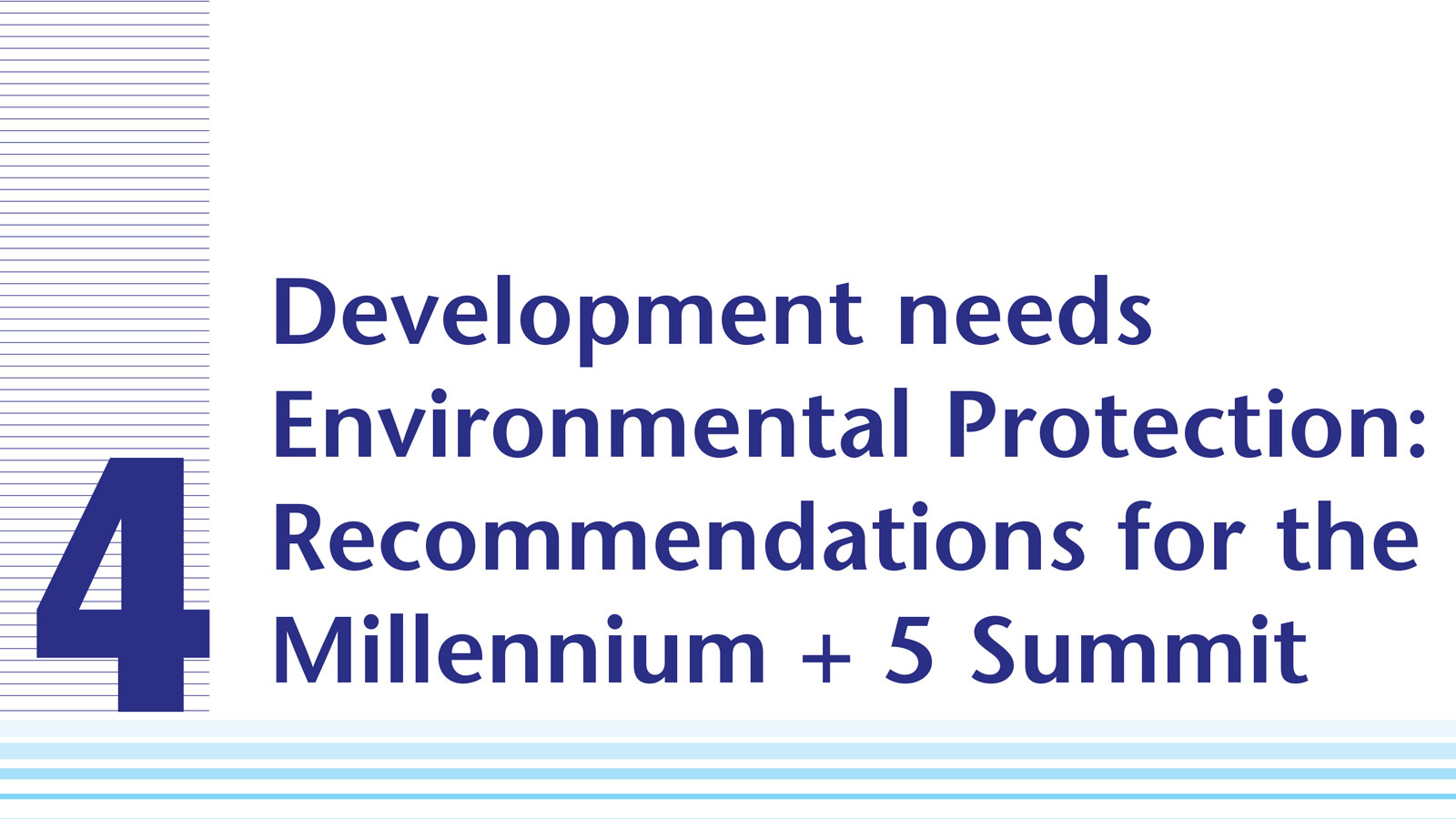 The Millennium + 5 Summit will review progress towards the achievement of the Millennium Development Goals (MDGs) and take stock of the United Nations' capacity to act.