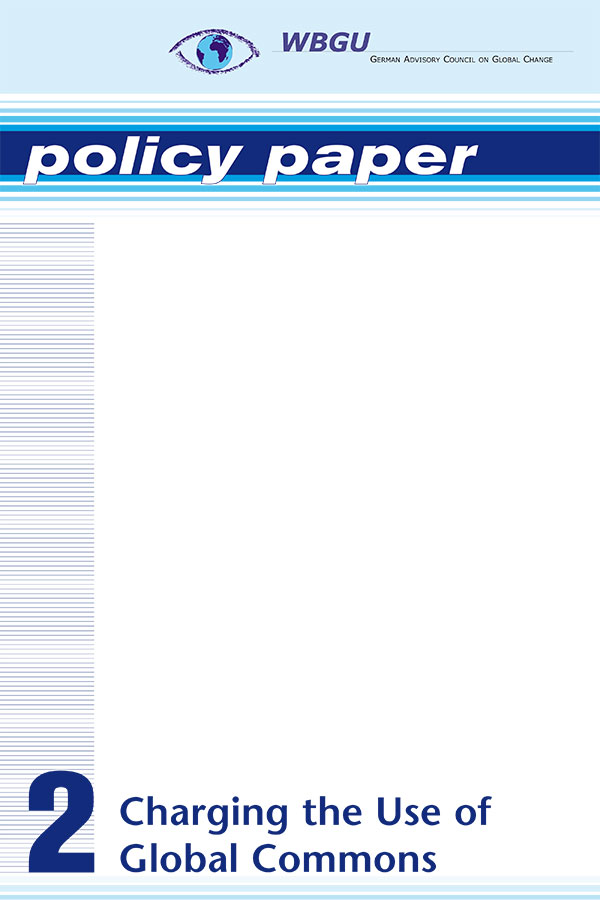 Charging the Use of Global Commons

In the run-up to the United Nations International Conference on Financing for Development (UNFfD) due in March 2002 and the World Summit on Sustainable Development (WSSD) due in September 2002, the question of how to finance global sustainability policy is moving to the centre of attention.

The problems of global change are mounting (WBGU, 2001), and the international community is increasingly pronouncing its willingness to tackle these problems in a cooperative fashion. However, the question of how to raise the necessary financial resources has not yet been resolved satisfactorily.
This affects, among other things, the ambitious development goals set by the United Nations at the Millennium Summit in September 2000. These goals include, above all, halving by 2015 the proportion of the world’s people living in extreme poverty, but also improving access to potable water and basic health services, achieving universal primary education and preventing a further spread of HIV/AIDS. Whether these and other sustainability goals can be achieved is called into question not least by stagnating official development assistance (ODA) budgets.
These problems are on the agenda of the UNFfD conference, which will take place in Monterrey, Mexico. The developing countries expect substantial commitments by the industrialized countries to increase resource transfers and to implement promptly the goal of making available to developing countries 0.7% of industrialized-country gross domestic product for official development cooperation activities. If no agreement to increase financial transfers from North to South can be found, the success of the WSSD in Johannesburg also appears endangered. However, the UNFfD will also tackle, in addition to official development finance, other topics such as mobilizing domestic financial resources, private capital flows, international trade, mitigating the indebtedness of developing countries and reforming the international financial system. The question of official development finance thus needs to be examined within the context of this comprehensive agenda. Besides increasing the financial resources for official development cooperation, this is also a matter of creating appropriate institutional framework conditions at national and international levels so that private-sector and public-sector sources of finance can be harnessed increasingly for concerns of international environment and development policy.
The German Advisory Council on Global Change (WBGU) wishes to contribute to the debate in this area. The Council has already addressed these questions in its 2000 annual report “New Structures for Global Environmental Policy”, proposing, among other things, the levying of charges for the use of certain global common goods (‘global commons’) such as international airspace and the high seas (WBGU, 2001). In that report, the Council also noted the possibility of introducing international payments for non utilization obligations in order to safeguard national resources whose conservation is of common global concern.
In this policy paper, the Council summarizes the key findings of its special report on user charges within the framework of global sustainability policy (WBGU, 2002), and makes recommendations for a politically viable implementation of the concept of global user charges for three specific areas of application:

Charging the Use of Global Commons