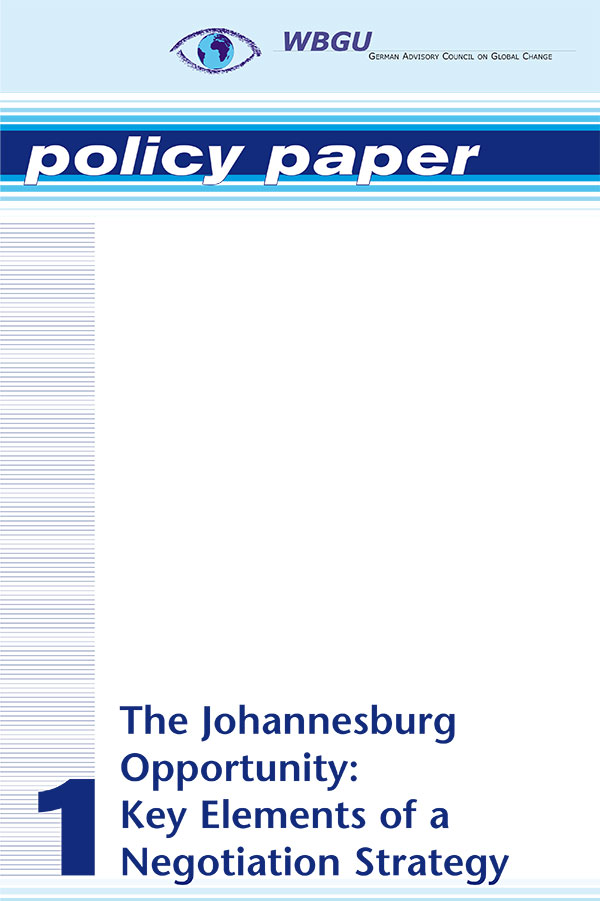 The Johannesburg Opportunity – Key Elements of a Negotiation Strategy

Johannesburg in South Africa is a symbolically important venue for the World Summit on Sustainable Development (WSSD).

No other continent has been worse affected by the impacts of global change and exhibits in such representative form the critical environmental and socioeconomic situation facing many developing countries. At the same time, the host nation epitomizes new hopes and beginnings following the radical changes it has undergone in recent years.
A new beginning is necessary at the international level, too, given the further deterioration in the state of the global environment since the 1992 United Nations Conference on Environment and Development (UNCED) in Rio de Janeiro (WBGU, 2001b). New problems have arisen and the most critical remain unsolved. The WSSD to be held in September 2002 in Johannesburg provides the international community with yet another opportunity to set the future direction of international environment and development policy. In the run-up to this event, the WBGU would like to focus the attention of the Federal Government of Germany on some crucial issues where decisions in Johannesburg could help to eliminate critical shortcomings in current environment and development policy.
A great deal has been achieved in the field of global environmental policymaking since 1992, in particular the international conventions and treaties dealing with a range of global environmental problems such as climate change, loss of biodiversity, desertification, or the impacts of persistent organic pollutants. In the view of the Council, the Johannesburg summit should therefore refrain from detailed negotiations on these topics. However, it must be possible to provide new ideas and inspiration, to close gaps and loopholes, and to take the various conventions a stage further.

The Johannesburg Opportunity – Key Elements of a Negotiation Strategy