In this policy paper, the Council makes it clear that if dangerous climate change is still to be avoided, a reversal of current trends must take place within the next ten years and greenhouse gas emissions worldwide must be halved by 2050 compared with a 1990 baseline. The urgent need for immediate action is further underscored by the report on the science of global warming recenty published by the Intergovernmental Panel on Climate Change (IPCC).

For successful climate protection, a transformation of the world's energy systems is key. It is technologically viable, marking a shift away from fossil towards renewable energy sources, and requires rapid utilization of high efficiency potentials. Among other things, it is important to encourage consumers to make use of the energy-saving technologies which are already available, for example for their domestic appliances, cars and homes. Investing in climate protection is economically efficient, as the costs of effective climate protection are far lower than the costs of inaction. The longer we delay, the more expensive climate protection will become.

There is a widening gap between the action that is urgently needed and current climate policy. The Council is therefore convinced that a new climate policy dynamic is required worldwide. Germany's dual presidency of the Council of the European Union and G8 offers a particularly good opportunity to drive global climate protection forward. The Council recommends the following initiatives:

The European Union should strengthen its leading role in international climate protection. By launching an 'efficiency revolution' and substantially expanding its use of renewable energies, the EU can demonstrate to the international community that climate protection is feasible. In order to maintain its credibility, the EU must achieve its agreed emissions reduction targets as a matter of urgency. The EU's Emission Trading Scheme must also be developed further and improved rapidly. Public procurement policy needs to be geared towards climate compatibility. Subsidies for fossil fuels and nuclear energy should be phased out. The EU should also use its influence to reinforce the link between poverty reduction strategies and adaptation to climate change in development cooperation and at multilateral level.

Fresh initiatives from the heads of state and government are required to inject new life into the faltering climate process. The G8 countries and the five major newly industrializing countries Brazil, China, India, Mexico and South Africa, as the world's leading political and economic nations, should now send out clear signals and agree an 'innovation pact on decarbonization'. As key elements of the pact, the Council recommends the adoption of joint parameters for efficiency and CO2 emissions standards, the development of a road atlas for the decarbonization of energy systems, and the promotion of technological cooperation. The innovation pact could encourage countries which have been dragging their feet on climate change to show greater commitment to the UNFCCC negotiations. The G8+5 countries thus have the potential to become the driving force in international climate policy.

The UNFCCC's objective is to avoid dangerous climate change. To this end, the Council recommends the adoption of a global temperature guard rail limiting the rise in temperature to a maximum of 2°C. The Kyoto Protocol must also be developed further and offer effective incentives for the transformation of energy systems. The industrialized countries should commit to ambitious reduction targets. Global climate protection targets can only be achieved if the USA also substantially reduces its greenhouse gas emissions. At the same time, mechanisms need to be established for the progressive integration of the newly industrializing and developing countries into commitment regimes on a differentiated basis. Appropriate priority should also be given to adaptation to climate change. This must include firm pledges from the industrialized countries on financing and technological cooperation.

12 February 2007, Presentation of the Policy Paper 'New impetus for climate policy: making the most of Germany's dual presidency' 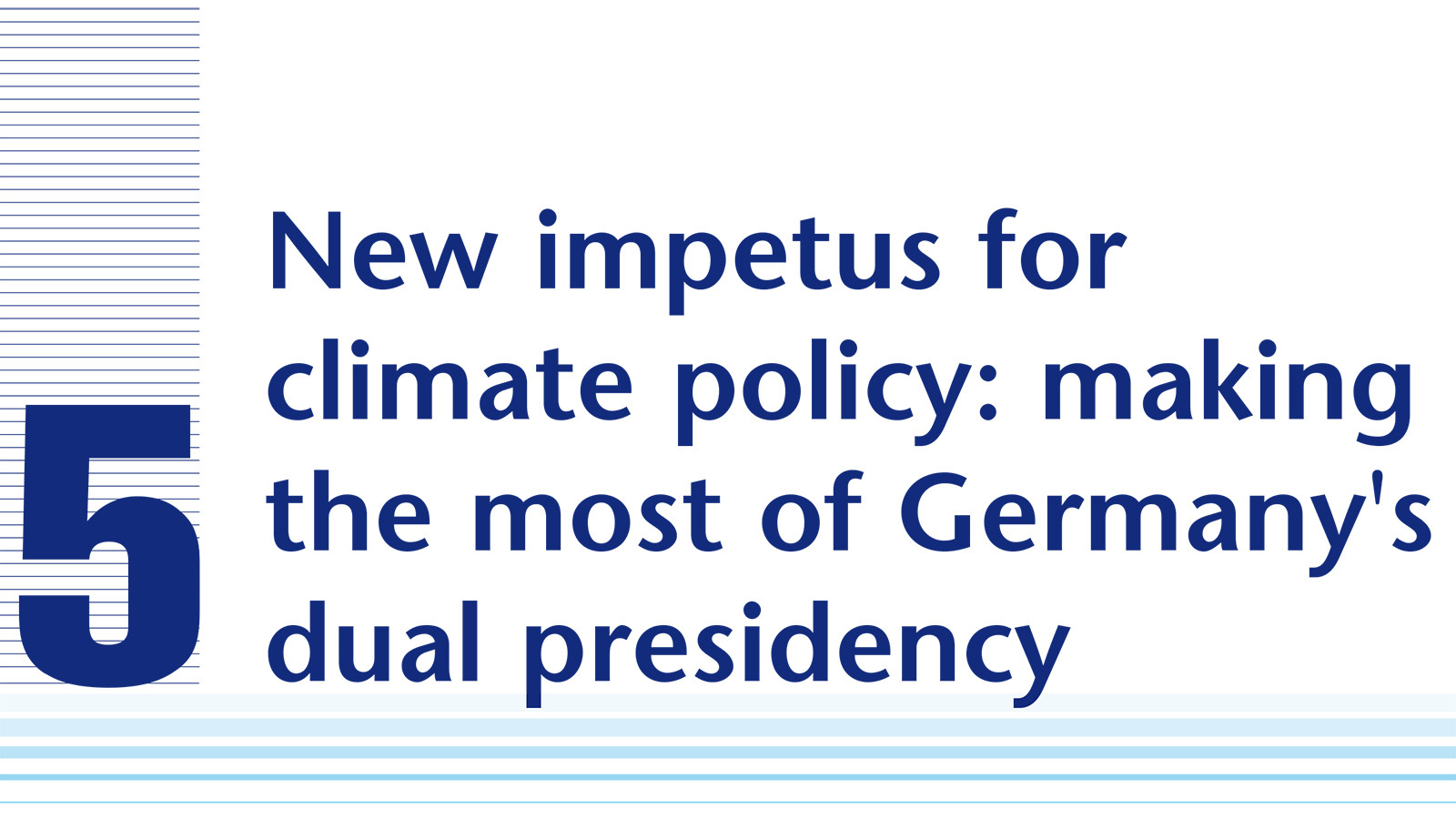 If dangerous climate change is still to be avoided, a reversal of current trends must be achieved within the next ten years, and greenhouse gas emissions worldwide must be halved by 2050 compared with a 1990 baseline.